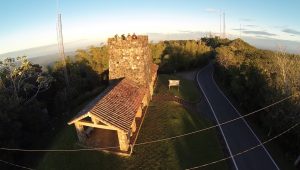 Cafiesencia obtained with the collaboration of the University of Puerto Rico at Mayaguez and the Interdisciplinary Center for Coastal Studies (CIEL) the entry of two properties under the works of the Conservation Civilian Corps (CCC), a program featured under the NEW DEAL, to the National Register of Historic Places. These properties are the Fish Hatchery in Maricao and the Observation Tower in San Germán. This work was made possible thanks to a grant from the Puerto Rico State Historic Conservation Office (PRSHPO).